My dad’s eyes popped out of his skull as his hands anxiously searched his empty shoulders.

“Ohmygod. Where is my backpack?”

My dad’s beloved black backpack was not on his back, at his feet or anywhere else in the tiny pizza joint where we’d stopped for water and sodas in Rome. Only a Nikon camera was slung around his neck, the weight of which likely distracted him from noticing his bare back.

The backpack contained my mom’s, dad’s and brother’s passports, along with an iPad, a ticket to retrieve all of our luggage from storage at the train station, and other personal belongings. Out of the five bags we were carrying, it was by far the most important.

“When did you have it last?” my mom inquired.

My dad racked his brain.

“I’m almost positive I set it down on the floor of this restaurant when I was grabbing our drinks…I could’ve sworn…There’s no way I could have walked around the city without noticing the bag was not on my back…” he said with a level of uncertainty in his voice.

We began scanning the restaurant for any sign of the missing bag and asked the two workers if they had noticed it.

“Only camera,” they explained in broken English, pointing to the Nikon hanging from my dad’s neck. No backpack.

I scrolled through my most recent GoPro videos to see if I had captured any footage of the backpack. Nothing.

Next, I sifted through the Nikon photos. The last photo taken revealed the bag lying in the corner of a photo of Cole and me. My dad had left the bag next to us while he snapped some pictures. 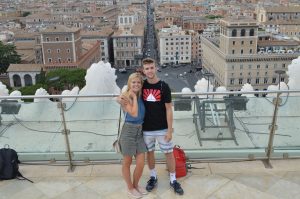 There was zero evidence of whether the bag ever moved from that spot.

All of us were trying to stay calm and hide our panic.

We had spent a half hour atop the Altare della Patria, a monument built in honor of the first king of Italy, before walking directly to the restaurant. That meant the only other place the backpack could be was at the monument’s observation deck.

We walked hastily back to the colossal building, which was teeming with tourists. The observation deck is one of the highest points in the city and offers a birds-eye view of the Colosseum and St. Peter’s Basilica. To get to the top, you have to take an elevator and pay €7/person, so the crowds are slightly thinner.

But I wasn’t getting my hopes up. The chances of an abandoned bag full of valuables being safe in a big city like Rome are slim.

“Will you look up the US Embassy?” I asked Niko, the only person with cellular data.

If we didn’t find the backpack and get the passports, my family was screwed. Niko and I would have to fly to Helsinki on our own while my parents and Cole stayed behind to get new passports and flights.

Cole, Niko and I sprinted up dozens of steps until we reached the ticket area for the observation deck.

The woman gave me a smirk. She knew exactly what I was looking for.

“Can you describe what you lost?”

I gave her a quick description of the backpack, and she nodded her head.

“Yep. It’s at the top. We were notified by other tourists, and were waiting to see if anyone claimed it. We take abandoned bags very seriously due to terrorism, so you have to be careful,” she explained icily.

One tourist who had just gotten off the elevator from the top chimed in, saying many people had noticed the potentially dangerous backpack. The bag was basically dead center in the middle of the roof, so it looked a bit conspicuous to observers.

The woman sent up a co-worker to retrieve the bag, and sure enough, it was the one. The co-worker scolded us again, explaining that they have to call the police if there are any deserted bags that could be threats.

We apologized repeatedly and breathed massive sighs of relief. I thought there was about a 5 percent chance that we would ever see that bag again. But within minutes of realizing it was missing, the bag was returned to my dad’s back.

This was possibly one of the luckiest outcomes ever.

All because the bag looked especially sketchy.

Cole, the family member who would lose his head if it weren’t attached to him, took full advantage of this opportunity to tease my dad for his blunder. Especially since my dad is hands-down the most meticulous person in our family and the least likely to lose a possession.

“Hey dad, are ya sure your bag is with you?” Cole jeered for the rest of the evening.

My dad’s classic phrase is “parking karma,” which refers to his uncanny ability to always find an available parking spot smack dab in front of his destination.

On this day in Rome, he had backpack karma. 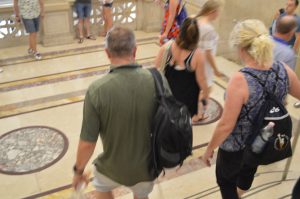 My sneaky documentation of the safely returned backpack