Skip to content
March 6, 2017 by author No comment(s) Travel

1. 10+ hour road trips are manageable (especially when Mardi Gras is the end destination).

The trip from Chapel Hill, NC to NOLA took more than 12 hours. It was the longest amount of time I’ve ever spent in a car…and I was dreading it. I thought for sure it would feel like a never-ending road trip where you can’t stop thinking, are we there yet? I road-tripped with my boyfriend Niko and roommate Nalini, and on the way down to NOLA, we stopped in Atlanta and spent the night in a hotel to break up the trip. However, on our way home, we loaded up the car at 4:30 a.m. and headed north – nonstop.

Fortunately, with three of us in the car, we were able to take turns driving. Despite my initial fears that the road trip would be exhausting and somewhat miserable, we were actually able to sleep and relax, and we spent a lot of time listening to the Serial podcast. The time passed much quicker than expected. While I don’t plan to do any other trips that require 10+ hours of driving anytime soon, it was completely manageable and quite rewarding by the end. 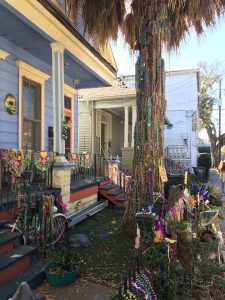 2. Having a local with you makes a huge difference.

I was lucky enough to have a place to stay in the heart of New Orleans with a friend’s family. Not only was the location incredible, but the biggest perk of all was being guided around NOLA by locals. They were full of tips and recommendations, showed me areas of NOLA I never would’ve seen or heard about on my own, and allowed me to tag along and hang out at their friends’ beautiful historic homes. Having a personal tour guide in any city makes the experience all the more fulfilling and memorable. 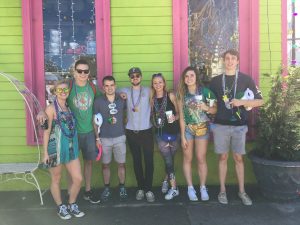 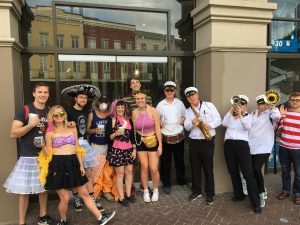 3. People do not prioritize – or even think about – meals during Mardi Gras.

Throughout the duration of my stay, I had to constantly remember to eat! People seem to just forget the importance of feeding themselves during Mardi Gras, and instead replace those calories with alcohol. I overheard one local saying, “I don’t think I ate anything yesterday…I just drank all day!”

“Breakfast” during Mardi Gras means mimosas or spiked coffee, and lunchtime is nonexistent. Now I’m not complaining about waking up to a mimosa (with freshly squeezed oranges from the backyard orange tree!), but I need sustenance to survive, so I was typically the one making toast and cramming snacks down my throat before we left the house. 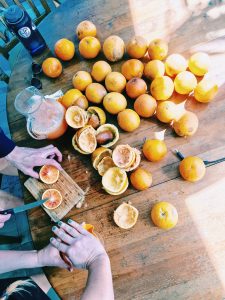 4. Speaking of food, you can’t leave without eating beignets, po’ boys and seafood.

Beignets (aka fried dough smothered in powdered sugar) and po’ boys (traditional Louisiana sandwich) are both to die for. I highly recommend Cafe du Monde for their beignets and Domilise’s for their po’ boys. As for seafood, you can get it almost anywhere and it’s all delicious. My stomach forgave me for the lack of nourishment during the week when I filled it with a fried shrimp po’ boy. 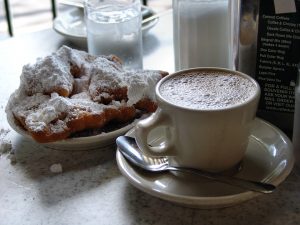 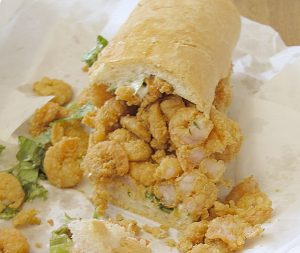 5. The day parades are the best.

I much preferred the day parades to the night parades for several reasons. For one, you could fully appreciate the decorative floats. The intricacies behind the paint, designs and decorations are remarkable, and much more visible in daylight. Secondly, the daytime parade audience was a lot more cheerful and coherent. During the night parades, I experienced multiple rude and hangry drunks in the crowd. You could tell they were the ones who replaced lunch and dinner with whiskey and vodka. The day parades were very family-friendly and full of good vibes. Thirdly, you could catch way more beads, toys and souvenirs! The crowds are thinner during the day so you can get very close to the floats and walk away with a whole lotta loot. 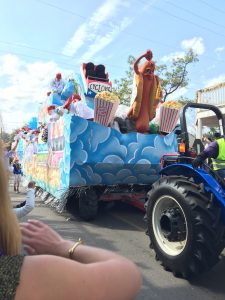 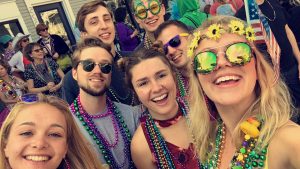 6. Almost everyone in the parades is very, very intoxicated.

I naively assumed that everyone marching, dancing and cheering in the parades was just full of natural energy and excitement, when in fact many were actually just super drunk. I witnessed dozens of jello shots spill out of a van that belonged to a dance troupe of middle-aged women. I saw one man on a float swaying side to side after giving up on throwing beads to the crowd. Next thing I knew, he was lying in a drunken stupor on the base of the float. Other parade participants were chugging beers and taking shots as they gallivanted through the crowds. 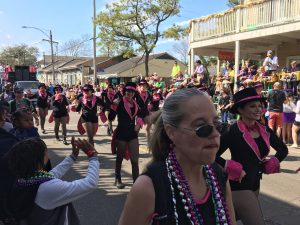 7. Meeting up with people at parades is near impossible.

I stayed close to my group of friends throughout the duration of the week because I knew if I lost them, I was doomed. I kept attempting to meet up with Nalini during the day and night parades, and my attempts proved fruitless. There are tons of blocked off roads and barricades while the floats are in motion, so if you’re on one side of the barricade and your friend is on the other, there’s nothing you can do until the parade has passed. Additionally, the cell signal is spotty in the densely populated areas and the sea of bodies makes it hard to spot your friends. Moral of the story: don’t lose your friends in the crowds! 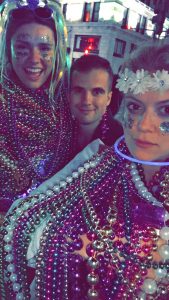 8. There are no open container laws in NOLA, so you don’t have to blow all your money at bars!

I didn’t spend a single penny at any bars in NOLA, and instead enjoyed hanging outdoors with a beer in hand. My friends and I were able to watch the parades, explore the city, and lie by the river with our drinks, and without a single worry. In my opinion, it’s way more satisfying being able to enjoy a beer in a park rather than at a bar, and you have to take advantage since there are so few cities in the U.S. with no open container laws. Plus, you don’t have to break the bank at bars. 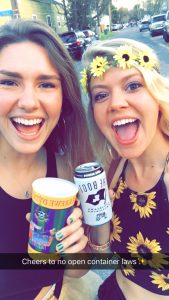 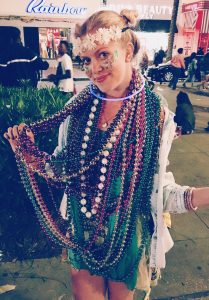 9. You will begin to second-guess whether you’re actually in a U.S. state.

Upon arriving in NOLA, you’ll feel like you’ve left the U.S. and entered a European city. The unique architecture, the lax public consumption laws, European-style eateries, and emphasis on walking and biking create an entirely different feel than most U.S. cities. I particularly loved the shotgun houses and colorful Creole cottages that lined the streets. If you’re looking to visit Europe, you may want to reconsider and just travel to NOLA! It’ll be easier on your wallet and still have a unique, cultural feel. 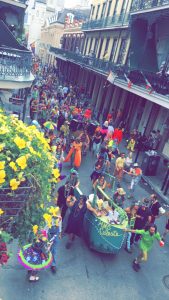 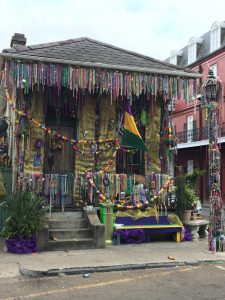 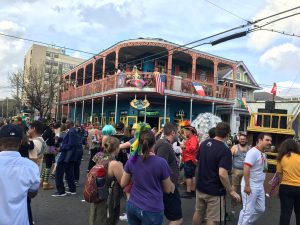 10. A rest day is critical before Fat Tuesday.

People essentially party for a week straight leading up to Mardi Gras. I don’t know about you, but I don’t have that kind of stamina. We arrived on Friday evening and engaged in all of the festivities until Sunday night. Once Monday rolled around, my friends and I were ready to just chill. A group of us spent most of the afternoon lying out by the Mississippi River sunbathing, sipping on cider, napping and doing acroyoga (a combination of acrobatics and yoga) under the warm Louisiana sun. My friend recently took up the sport, and she flipped and contorted my body into various shapes. We even had a small crowd gather around us to watch! I felt well-nourished and rested by the end of the day, and my engine was revved up for Mardi Gras. 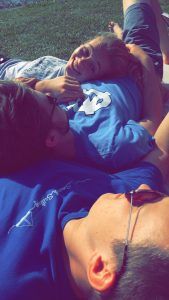 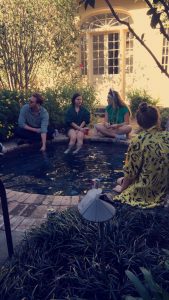 11. There’s no better place to be yourself and step out of your comfort zone than Mardi Gras.

The partygoers and attendees of Mardi Gras are all accepting and supportive of every person, regardless of gender, race, religion, sexual orientation, costume preference, etc. It’s a time to break out the wigs, glitter, tutus, costumes, body paint and boas without any restraints. The crowd’s love, support and energy was palpable. It truly felt like a judge-free zone where everyone was comfortable being themselves, or a slightly embellished version of themselves. I also learned that my boyfriend can rock a tutu and a purple-green-and-yellow wig like no other. 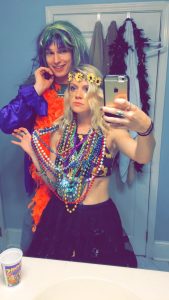 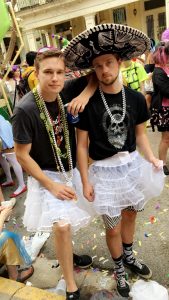 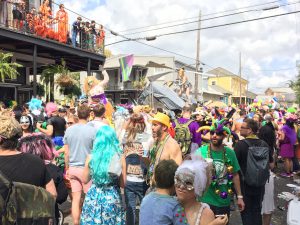 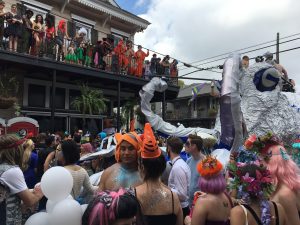 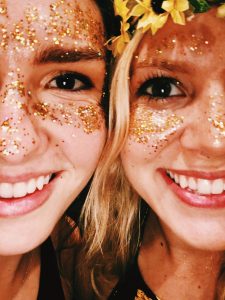 12. The locals love and adore their city.

New Orleans is populated with some of the most friendly and welcoming people I’ve ever met. Those who end up there find it hard to ever leave. For instance, I attended a party for a man named Lawrence Cotton (a local pianist legend) who was turning 90 and has lived in the same house since he was three. It was incredible seeing the community of friends and neighbors that has formed around him over so many years, even making his birthday an annual celebration called “Cottonfest” on his neighborhood block. Whether you were born and bred in NOLA or moved there at some point, few are looking to leave. It’s a city that’s easy to fall in love with and forever holds a special place in your heart. 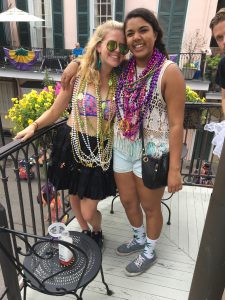 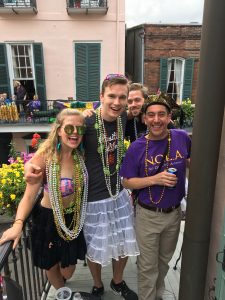