We stood atop the Whitney Museum of American Art in awe. It was an especially warm October afternoon, and the sun glimmered across the Hudson River to our right and atop skyscrapers to our left. We had spent the past two hours mesmerized by the paintings, sculptures, photographs, drawings, videos, and more at the Human Interest exhibition. I stood between my two best friends and roommates – Nalini and Abby – as we enjoyed our last college fall break together in the Big Apple.

A few months back, my roommates and I decided to explore NYC for our senior year fall break. For the last three years, I’ve spent my break in San Francisco to run the Nike Women’s Half Marathon. To my dismay, 2015 marked the last year of the San Fran race. However, I was beyond excited to spend the long weekend with two of my favorite people.

Our New York City trip was characterized by: 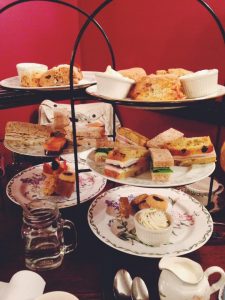 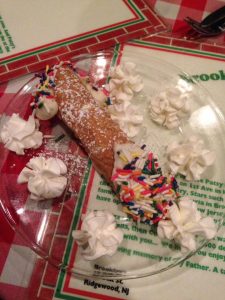 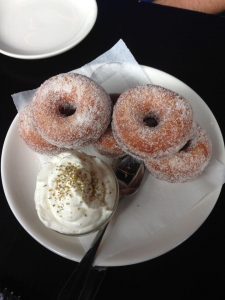 Tea house treats // the best cannoli ever // donuts with custard

It was a whirlwind of a weekend – we squeezed in as many places, activities and experiences as possible. This included walking 10+ miles each day in subpar footwear, experiencing nightlife as a Columbia student, strolling through Central Park, gawking at the lavish shops on Fifth Avenue, and inhaling delicious food.

But the best part of all? Filling our bellies with endless laughter. Nalini, Abby and I giggled our way through the city, laughing endlessly about our encounters, conversations, experiences and memories.

One of the most special aspects of the trip was getting to visit family and friends. We stayed with Abby’s brother and his fiancée in Hoboken for two nights, spent an afternoon having teatime with Abby’s aunt, enjoyed dinner with my aunt and uncle in Manhattan, and spent one night at Columbia University with friends from high school.

On Friday morning, Abby dragged Nalini and I out of bed after a late night out in Hoboken. Abby is a total morning person and wakes up at 7 a.m. regardless of how late she stays up. We shuffled out the door by 10:15 a.m. and rode the ferry into the city, where we met Abby’s sweet aunt, Diane.

Diane took us to Alice’s Tea Cup, a whimsical tea shop tucked away on one of the streets of NYC. The walls of the restaurant were decorated with elaborate artwork depicting scenes from Alice in Wonderland. There were even fairy wings available for little girls to wear as they sip their tea and munch on miniature cakes.

We settled into a small corner of the tea house and each ordered a personal pot of tea – chocolate chai for me! We also got a three-tiered tray of scones, finger sandwiches and desserts. I was in wonderland. 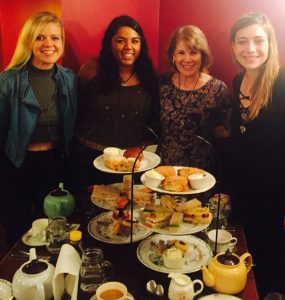 Nalini, Abby and I dedicated the rest of the afternoon to exploring the city. It was this day that we spent several hours captivated by the Whitney’s Human Interest art exhibition.

There was Andy-Warhol inspired artwork depicting the “Price of Fame.” Sculptures of nude men and curvaceous women in motion. People with despondent expressions on their faces staring at us in black and white photographs.

One of my personal favorites was a montage of photographs of fists pumping into the air. I could’ve spent hours admiring the detail and story behind each piece of art. 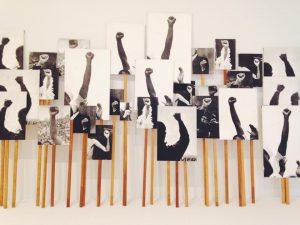 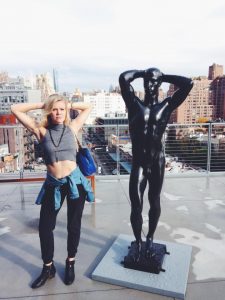 After admiring the views from the Whitney balcony, we strolled along the High Line until our feet began to bark. Among the three of us, we wore tall boots and heeled booties as our “supportive” footwear for the many miles of walking. My dad – who is in the shoe business – would’ve been appalled, and likely would’ve forced a pair of comfortable running shoes onto my bruised feet. 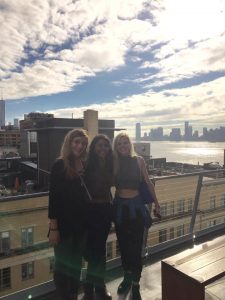 The Whitney balcony overlooking the Hudson River and NYC skyline

The next people we visited on our trip were two friends from Chapel Hill whom Nalini and I have known for years. After a short subway ride, the three of us were plopped in front of the gated entryway to Columbia University.

We began passing students and immediately looked at each other and laughed, saying, “Y’all, everybody we see here is a genius.”

That may or may not be true, but the sophisticated campus and colossal buildings emitted the level of prestige I had always imagined would ooze out of Columbia.

After joining up with our friends, we went to a lovely Spanish tapas restaurant to grab some dinner. We ended up at a table on the lower floor that was adorned with seasonal décor – low lighting with orange bulbs, rustic “trick or treat” signs, decorative cobwebs and more. I had a very happy stomach after slurping back sangria and wolfing down lobster mac and cheese (!). 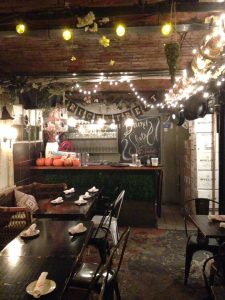 The night was still young, so we commenced the festivities at a low-key bar our friend Sarah recommended. It was well-decorated for Halloween, just like the tapas restaurant, and had a quirky, grungy feel to it. You walked into a narrow bar area, which opened up to a small dance space surrounded by leather couches. The bar was dimly lit, with only a few strings of orange lights dangling from the ceiling. 70s and 80s music blared from the speakers and disco balls rotated over the dance floor. 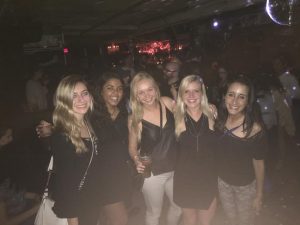 Reunion with friends; clad in black from head to toe, New York-style

After being inspired by the dancing, we ended up at The Jane – a classy, boutique hotel by day, bumping club by night. The hotel staff barely moves any of the furniture in the lobby (the primary dancing area), so people were standing on plush chairs and couches while pumping their fists to the beat of the music.

The late night turned into another early morning (thanks to Abby’s chipper wake-up call – “Good morning beautiful ladies…let’s get moving!”) and we said our goodbyes to our friends, who were already tailgating at 8 a.m. for a football game.

Our last day in the city was dedicated to cramming in every last sight and sound. We popped by Brooklyn to check out Smorgasburg, an outdoor food market, but were quickly deterred by the raging wind and rain that whipped our faces and turned my umbrella inside out. But we, of course, didn’t leave before ensuring that Nalini got some Sriracha-lime duck wings. 🙂 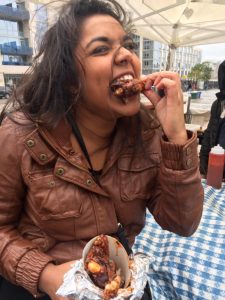 I wasn’t lying about the umbrella – or the duck wings

That evening, we strolled through Times Square, lost all of the feeling in our toes after covering almost every inch of Central Park, and window-shopped on Fifth Ave. As evening drew closer, we hopped on another subway to journey toward my Aunt Bonnie and Uncle Lloyd’s neck of the woods in Manhattan. We were greeted with a warm embrace, goblets of red wine and a smattering of cheeses, crackers and hors d’oeuvres.

Nalini, Abby and I told them all about our past and future travels, always a common conversation among our group. The time flew by unnoticed until Uncle Lloyd announced that we ought to get moving in order to make it to dinner. It was already 10 p.m.

We settled on an upscale Japanese restaurant, which came highly recommended by Lloyd. Bonnie insisted we go elsewhere for sushi because this particular restaurant had recently changed the interior décor and gotten rid of some ornamental bonsai trees that Bonnie adored. It was the funniest critique I’d ever heard.

“You can’t go there – they got rid of the bonsais!” she exclaimed.

Despite the lack of bonsai trees, we had a fabulous and forever memorable meal. The three of us ordered a bottle of prosecco on ice and an assortment of sushi, and we proceeded to go around the table and say what we loved and admired most about one another. It was the most honest, genuine and uplifting conversation I’d had in a while.

My love for these two women is endless. I could not have imagined a better way to close out our last fall break. 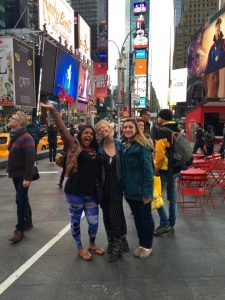 It only took about 10 minutes after arriving home in Chapel Hill on Sunday before the three of us crawled into my bed and laughed about how much we love spending time together. Apparently 72 hours straight together wasn’t enough.