Places I visited: Barcelona and Madrid

I peeled open my eyes, blinded by the penetrating sun seeping through the windows of my Airbnb. My head was throbbing, my mouth felt like a desert, and I was completely discombobulated. The clock read 1:14 p.m.

It was my first morning in Barcelona. 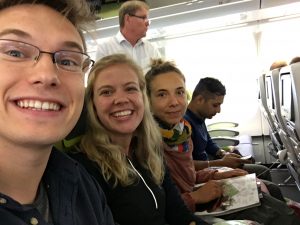 After 15 hours of travel, two layovers and one metro ride, I arrived in Barcelona – the first leg of my European summer venture! My four-night stay was located in a spacious penthouse apartment with two outdoor terraces overlooking a residential area of the city. Niko, Carina (Niko’s older sister) and I were travel partners for the week, and the first two things we did in Barcelona were 1) nap and 2) check out the nearest supermarket.

Niko’s and my favorite thing to do when we arrive in a new city is go to the grocery store. We are like little kids in a candy shop as we scan the aisles for goodies. The markets in Spain are some of our favorites because you can walk in with 2 euros in your pocket and walk out with a full bag of food and drinks.

4 interesting facts about supermarkets in Spain

When Niko and I aren’t cooking at our Airbnb, we opt for eateries with outdoor seating or hole-in-the-wall places. During this trip, we rarely ate a full meal anywhere. Instead, we’d graze on a few small plates and then continue walking until stumbling upon another restaurant or cafe that caught our eye. This way, we were able to try a large variation of places, foods and drinks!

The culture of eating out in Spain is unlike anything I’ve experienced. Restaurant tables are filled at all hours, every day of the week. I don’t know when or how the people of Spain get any work done, but I’m envious of their lifestyle.

Niko and I were sometimes the only customers not having an alcoholic beverage at 10 a.m. But who can blame the Spaniards? Beer is cheaper than water here! 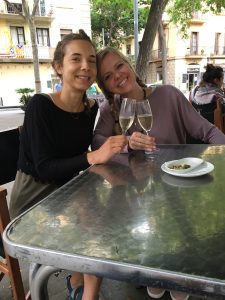 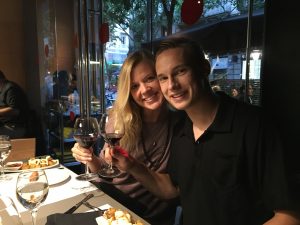 5 foods and drinks you must try in Spain 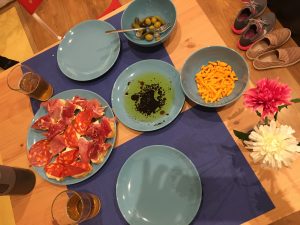 During our travels, Niko and I always glance through TripAdvisor’s recommendations for the top-rated attractions and restaurants, but we prefer to create our own adventure by finding hidden gems in the nooks and crannies of big cities.

Upon arriving in Barcelona, Niko, Carina and I first checked off all of the major sites, such as Sagrada Familia, Park Güell, La Rambla, etc. From there, we mapped our own expedition route and wound up finding all sorts of obscure city treasures off the beaten path.

We also got to spend one evening with my best friend, Nalini, and her two brothers! It was our first night and their last night in Europe, and we celebrated with a big paella dinner and a nighttime stroll through downtown. It was a huge highlight for me getting to spend time with Nalini because we’re both moving far away from Chapel Hill soon (she’s off to Botswana for the Peace Corps!). 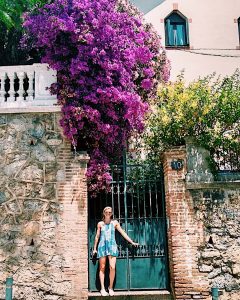 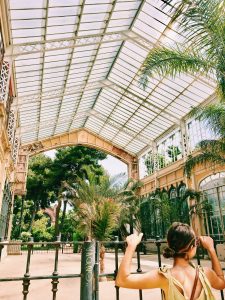 Barcelona is essentially an intricate maze of narrow streets lined with shops, cafes, restaurants and apartments. The balconies of the apartments faced the streets and many were decorated with billowing plants and flower pots.

Each time we turned a corner, we hit a new leg of the maze. 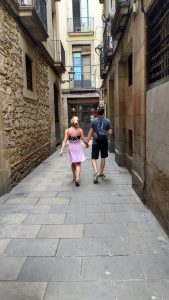 I always looked forward to coming home at the end of a long day of walking in Barcelona. Niko, Carina and I spent a lot of quality time on the terrace drinking tinto and cervezas while watching the sunset. We also enjoyed home-cooked brunches and downtime spent reading and writing. 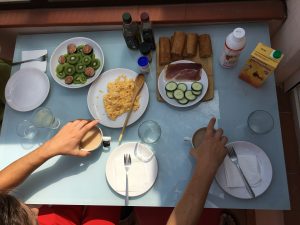 My Top Recommendations for 3 Days in Barcelona 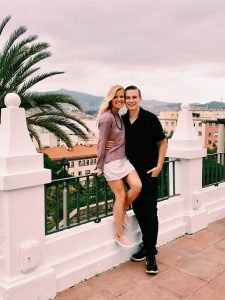 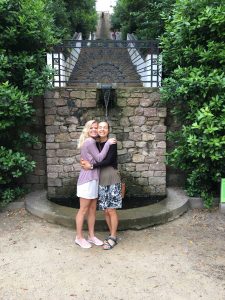 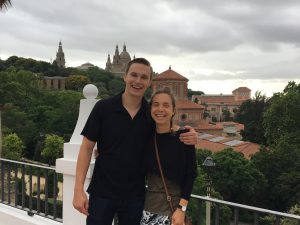 Views from the Teatre Grec Garden

On a Saturday afternoon, Niko and I arrived in Madrid after a speedy flight (Carina jetted off to Malta to stay with some friends). Our Airbnb host welcomed us into his charming studio apartment, which was not much larger than a dorm room. The walls were covered in cartoon and comic book artwork, which gave the small space a lot of character. 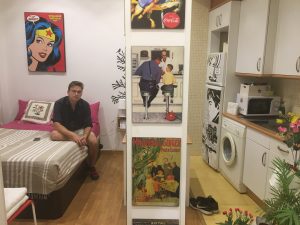 Madrid is one of the most romantic, regal and relatively quiet cities I’ve ever visited. The capital of Spain is steeped in history dating back to the ninth century, and the entire city has an old town feel.

While we were there, the temps reached 100°F! We had to constantly visit markets to load up on jugs of water.

Niko and I made the “mistake” of over-ordering at several restaurants because we assumed the cheap prices meant small portions. Five euros for steak tostadas? Must mean a microscopic piece of bread with a tiny slab of meat…let’s get four of them!

We probably furthered the notorious stereotype of Americans always overeating, but we couldn’t pass up the extensive lists of delicious and inexpensive food. 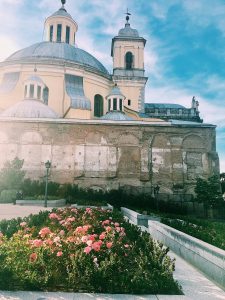 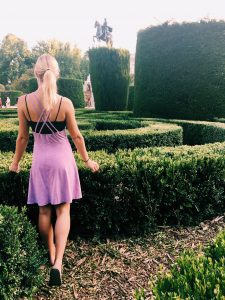 One of my favorite moments in Madrid was the walk home on our first night. The sun had dropped and the street lamps cast a warm glow on the royal palace, which lit up the entire central area. Nearby, a local harpist thrummed away, creating an whimsical melody that had me in a trance. Niko and I listened to several songs, dropped a coin in the harpist’s box, and meandered back to our tiny studio. 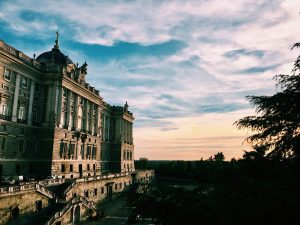 Top Recommendations for 3 Days in Madrid 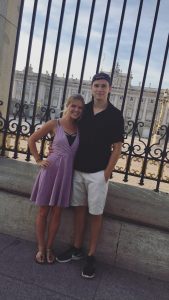 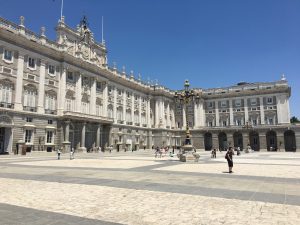 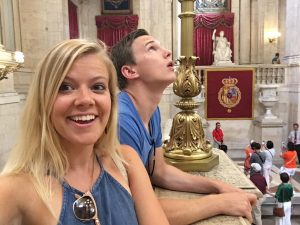