Whirlwind. A complete and utter whirlwind. That’s how I would sum up the past few months of my life.

Four months ago, I was tossing my Carolina blue (yes, that’s an official color) graduation cap in the air along with several thousand other beaming UNC students. I was running on about two hours of sleep, after spending the entire weekend with my family, relatives, and best friends, hopping to and from various graduation parties and events.

Three weeks later, I was jetting off to Europe with Niko, where we spent the the next two months traversing the continent. We visited 13 countries and squeezed in every possible opportunity. If you’ve been following my blog, you probably know a lot about our adventures.

Two months abroad zipped by, and I arrived home to Chapel Hill, NC in early August. I was thrilled to be reunited with my family, and I spent the week unpacking, unwinding and unplugging from the social media/blog world. But almost as quickly as I’d unpacked my Europe backpack, I was packing up dozens of boxes and bags to commence my cross-country move to Portland, OR.

Two weeks ago, I said a very tearful goodbye to my family before setting off for Portland. Niko and I drove through 12 states in 4 days in order to make it to our final destination, while stopping along the way to visit family (and crash at a motel in Nebraska).

One week ago, I made it to Portland after 45+ hours of driving, and I received keys to my first “adult” apartment.

I had only one week at home sandwiched between my Europe trip and US road trip. If I could change one thing about my extraordinary summer, I would’ve stretched my time in Chapel Hill as long as possible. I would’ve allotted more time to run errands and go grocery shopping with my dad, watch Ellen Degeneres clips and SNL skits with my mom, and laugh incessantly at Cole’s sarcastic, witty comments and stories. 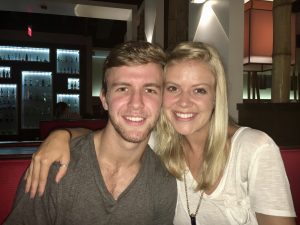 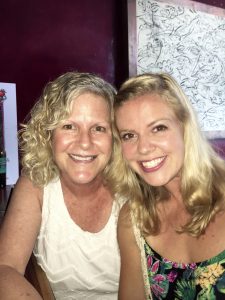 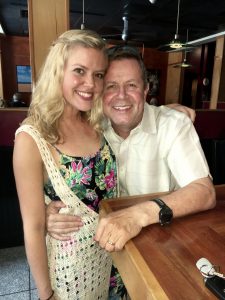 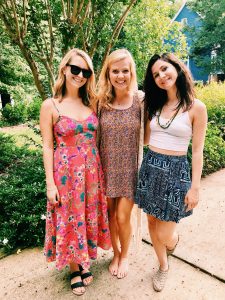 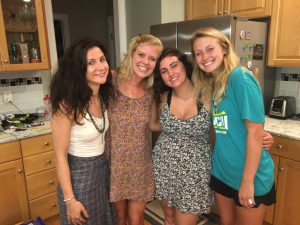 My parents were instrumental in helping me prepare for the cross-country move. My mom spent several days helping me pack everything I own into boxes. She helped me organize and consolidate my items, reasoning with me each time I tried to convince her that I absolutely needed to bring x, y and z. She struck the perfect balance of remaining empathetic when I defended my personal attachment to certain belongings, while also convincing me that it’s not a good idea to lug decorative margarita glasses across the country. When my enthusiasm for packing began to languish after four too many hours of sorting through my stuff, her energy flowed into me and fueled me with a second wind. Without her, it would’ve taken me three times as long to prepare for my move.

My dad, the expert packer, took each box and bag and placed them like perfectly-fitted puzzle pieces into Razzy, my beloved silver Toyota RAV4. He also took my loose clothing and shoes and shoved them into every nook and cranny until the back of my midsize SUV was packed to the brim (with jusssst enough space to see through the back window). In total, I had 9 or 10 boxes. Niko had about 3. I guess I’m not the minimalist I aspire to be…

Thursday, August 17th rolled around after several days of denial. It marked the day I would permanently leave my home of 16 years. My alarm buzzed at 5:20 a.m. and I rolled out of bed after only a few hours of sleep. I had spent the previous night hugging and loving on a few of my best friends, and then watched two episodes of Parks and Rec with my family before crawling into bed after midnight.

Despite the lack of sleep, I was wide awake and alert. I had been anticipating this day for several months now.

At 5:45 a.m., I stood in my garage and stared blankly into the back of my crammed car, a million thoughts whirling around my head. Cole stood next to me and wrapped his arms around me. His warm embrace told me, I’m going to miss you and you’re going to be okay. I leaned my head against his shoulder, my eyes welling up with tears.

There was no denial anymore. I’d barely shed a tear in the weeks leading up to this day, and finally reality was hitting me full-force. It was time to accept and embrace change. I hugged my mom, dad and brother tighter than ever, tears streaming down my face, and told them how much I loved them. I missed them already, and I hadn’t even left my driveway.

I let the tears continue to roll as I drove to Niko’s house, where we situated our two bikes on the back of Razzy, and I collapsed into an emotional heap all over again when saying goodbye to his parents. Needless to say, Niko took the first driving shift so that my teary eyes wouldn’t hamper my driving. 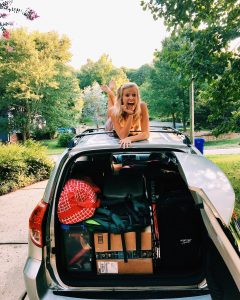 The next four days were a blur of driving, snacking, listening to podcasts and Spotify tunes, talking about everything under the sun, and being completely entranced by the stunning scenery across the US. Yes, the Midwest has a lot of cornfields and yes, driving along hundreds of miles of highways is not ideal. But we traveled through every terrain imaginable – valleys, mountains, crop fields, rivers, lakes, and vast expanses of nothing. There were entire fields without a single tree or crop, merely shrubs and dirt. It was fascinating seeing land stretch out to the horizon, as opposed to the NC highways I’m used to, which are lined with towering trees obstructing views beyond.

The 45+ hours spent in a car ended up being way more enjoyable than I expected. Niko and I took turns driving, so we always felt well-rested by the time we got behind the wheel. The time passed relatively quickly, even during our 10+ hour drives.

The first night of our road trip was spent in Chicago with Niko’s sister, Carina, and her partner, Joseph. We arrived in Chi-Town around 8 p.m. after 13 hours of driving, and we were extremely antsy to be anywhere but inside a car. We strolled along the lakefront, grabbed beers at a nearby bar, and ate a late dinner of Trader Joe’s frozen veggie pizza. We ended up staying in Chicago until mid-afternoon the next day to spend extra time with Carina and Joseph before heading to our enticing next destination – Lincoln, Nebraska. 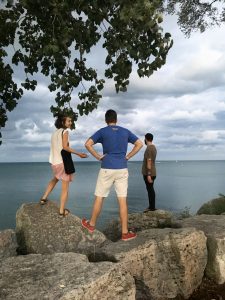 Luckily we didn’t hit any traffic during the 9-hour trek to our 2-star motel. We treated ourselves to a 10 p.m. dinner at Denny’s, just a few miles down the road from our luxury motel. But all jokes aside, you develop a serious appreciation for a bed and fresh air after spending all day in a car.

The third day of our trip was the shortest drive yet – a mere SIX hours!!! – to Cheyenne, WY, where my great aunt and uncle live. Although I’ve seen Auntie Bee and Uncle Dick countless times throughout my life, I’d never visited them in their home state. I fell in love with Wyoming’s open fields of prairie land and varying terrain. We spent the evening sharing stories, devouring Chipotle bowls, and Niko and I even went for a scooter ride through their neighborhood. I’m talking Razor scooters! 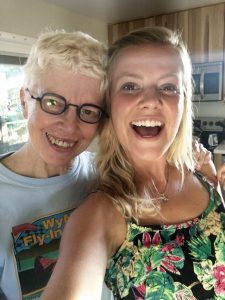 That evening, I searched for motels in Idaho for our next night of travel. We had easily snagged the motel in Lincoln less than 24 hours before arrival, but this was a different story – it was two days before the long-awaited solar eclipse. Motel prices had skyrocketed, ranging from $250-$1200. Never in my life had I seen a Super 8 motel with a $1200 price tag until now.

Niko and I weren’t about to cough up $250+ for a place to sleep. We considered all of the alternatives – staying in Cheyenne an extra night, sleeping in our car in Idaho, etc. In the end, we decided to push through all the way to Portland. This meant 17 hours of driving, and wrapping up our road trip in four days rather than the originally planned five.

Call me crazy, but the 17+ hours to Portland were surprisingly bearable. Maybe it was because I expected it to feel never-ending, maybe it was because I was itching to get to our final destination. Either way, we made it without a hitch after leaving Cheyenne at 5:30 a.m. and arriving in Portland at 9:30 p.m. We got to watch the sun rise and set that day, and it felt like the pieces of my new life were falling into place. 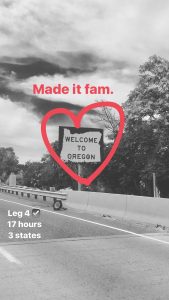 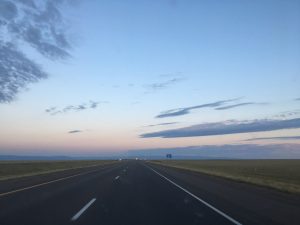 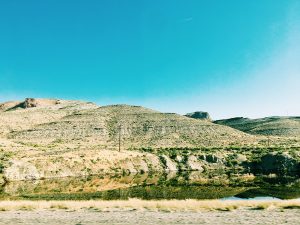 During the too-short week in Chapel Hill, it wasn’t easy watching my childhood room grow emptier by the day. It reminded me of packing up for college every August over the last four years, yet then I was only traveling two or three miles down the road to UNC.

For most college students, their parents are a phone call away, yet mine were a five-minute drive away. If I needed to speak with my family or if I was feeling too lazy to cook myself dinner, I’d just hop in Razzy and head home. This was a luxury that I wish I had never taken for granted.

I grew so much as a person during college. I worked extremely hard, gained a new level of independence and life skills, and overcame adversity and obstacles on countless occasions. But over the past few weeks, I’ve realized more and more that college was a giant stepping stone to the real world. I can’t even wrap my head around how much I will learn and grow over the next year, five years, decade, etc.

This is the next chapter of my life. There is a lot of uncertainty and changes. I’m living in a new place, with my boyfriend for the first time, and I’m starting a career – my dream career! It’s surreal, it’s exciting, it’s terrifying. But I think I’m exactly where I’m supposed to be.

My time has come to step out of my Chapel Hill comfort bubble and see not only what the world has to offer, but what I have to offer the world.